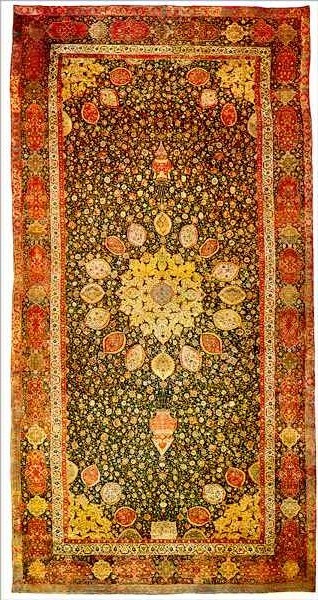 The Ardabil Carpet is actually two carpets. Both arrived in England in 1893.
This inscription is on both rugs:

I have no refuge in the world other than thy threshold.
There is no protection for my head other than this door.
The work of the slave of the threshold Maqsud of Kashan in the year 946
(The 946th year of the Prophet is about 1540 on the Christian calendar)

After spending almost 350 years on the floor of a shrine in Ardabil before the shine was damaged by an earthquake, they were in tough shape. One of the rugs was cannibalized in part to repair the other. The repaired carpet remains to this day on display in the Victoria and Albert Museum in London. The other carpet, minus a border and built-up from repaired sections was purchased by an American collector. Years later it fell into the hands of J.Paul Getty, an oil magnate and once the world’s richest man. He was offered as much as $250,000 (chump change for either of them) for the rug by King Farouk of Egypt, but donated the rug to the Los Angeles County Museum of Art in 1950. More about Mr Getty and his art museum to follow: 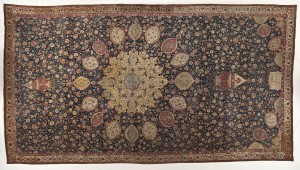 Were the rugs woven by the same man? Some experts say yes, some no. The naysayers point out that the rug in Los Angeles has a knot-per-square-inch count of 400 while the one in London is closer to 350: evidence of different weavers, they say.

Also of interest is the high probability that these Ardabil Rugs are not really from the Ardabil region. That is to say they are not examples of rugs fashioned in Ardabil.  More on that in our next post titled: A Closer Look At The Ardabil Carpets