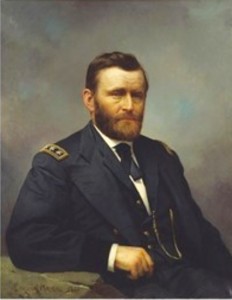 Yes, Ulysses Simpson Grant fans, there is such a thing as a US Grant Rug.  The 5 x 7 rug to the left is available at CafePress for $149.99…or it was when I wrote this post. US Grant as we all know, won the Civil War and became President.  Grant is probably my favorite American historical personage,  so when I got a chance to view his home in Galena, Il recently, I took it eagerly. And was rather disappointed. I went into the house hoping to see more of the original furnishings.  But the pictures on the walls were all copies and worst of all for me, the rugs on the floors weren’t as old as I am…and no I wasn’t around for that war. Don’t get me wrong, the entire experience wasn’t a bust: The proctor did a great job of showing me around the house and much of the furniture, including Grant’s favorite chair, was original.  The house itself is worth seeing and there was an interesting Union Army camp nearby with Union soldiers demonstrating the manual of arms with muskets.   Oh, and did I mention the tour is free? Contributions appreciated but not required.

Anyway, I returned home wondering what I could find on US Grant and rugs, carpets and tapestries. 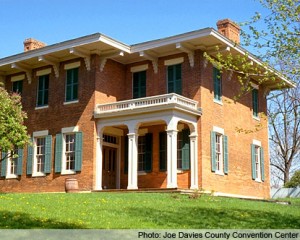 I knew from my reading that during his trip around the world he had received a number of beautiful gifts and I hoped to find images of them on the Internet.  But all I could find was mention of them: The following quote was found in an article by one of Grant’s contemporaries, one of his business partners(the one who went to jail for fraud), Ferdinand Ward:  “It would be impossible in the short space that this article affords for me to describe one-half of the hundreds of beautiful and odd presents this collection contained, but the extent of it can be imagined when I state that it took

four or five large cases in which to display these gifts, and even then they were somewhat crowded. Rare china, cut glass, works of art, books, pictures and all sorts of embroidered tapestries and the finest laces were there.”  It seems to me that there must be images of these gifts somewhere (the Smithsonian, maybe?) If anyone out there stumbles into them please let me know… 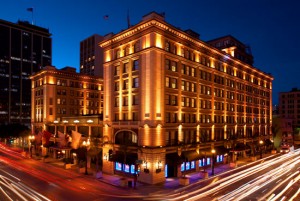 US Grant Hotel in San Diego…

guessed it, The US Grant Hotel.  Recently the carpet company Nourison, furnished the hotel with all new rugs.  As described on rugnews.com, “All the rugs and carpets were  woven of New Zealand wool on face to face Wilton looms.  Nourison created inset, bordered patterns that were  woven to specification  and fit to size in one seamless piece with design islands, borders and end caps already intact. Nourison also employed special techniques to emulate old world handmade floor covering, capturing the historical essence of the property, a stated requirement of the restoration effort.” 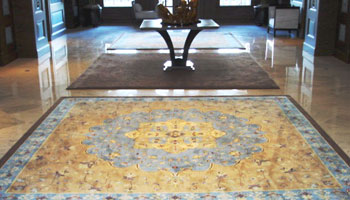 Nourison rug in lobby of US Grant Hotel, San Diego

Nourison rug in lobby of US Grant Hotel, San Diego