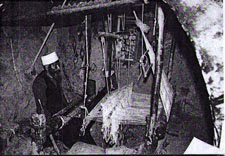 One of the best things about civilization and retirement is that the individual now has the free time to learn something new. Or maybe I should say that the best thing about civilization is retirement. Without civilization few individuals would live long enough to retire and even fewer would have free time. Legend has it that during hard winters the Eskimo people put their elders out to freeze when food supplies ran low. When I was younger that sounded reasonable. Now that I am nearing my eighth decade it strikes me as elder abuse!

Rugs, Carpets and Tapestries are everywhere around us and familiar to us all. But what do we know about them? Speaking for myself at the time most of this post was written in 2009, not a heck of a lot.

At about that time I was watching a documentary on the History Channel about the travels of St. Paul. I don’t claim to be religious, but I love history and I was fascinated by the story of this man’s travels throughout the ancient world. One of his stops was Cappadocia in central Anatolia. This ancient city, town, country, was cut out of volcanic rock over a number of centuries. There were pictures of homes and churches and wall paintings. What interested me, however, was the picture of a pit dug in the first century of the modern era as part of a weaver’s loom.

I remembered reading about this type of loom years ago in a book by Eric Broudy entitled “The Book of Looms.” It is called a pit treadle loom. The weaver would sit on the earth or a board (I hope for the sake of his hemorrhoids he sat on something other than the cold earth!) with his feet in the pit; the loom hovered over him. He would work the loom with his feet as he formed the cloth. The gentleman in the picture is seated at a treadle loom in modern (well, within the last century or so) Syria. I’m sure there have been a lot of improvement since the 1st Century, but basically it’s pretty much what we might have seen two millennia ago in Cappadocia.

In any case, it suddenly occurred to me that I wanted to combine my love of history and my obvious interest in rugs, carpets and tapestries. Being graphically challenged and too old to take up weaving, I decided to use the one skill I had acquired and write a blog detailing what I learned. While I hope someone besides me enjoys this blog, I’ve reached the age where I can’t worry about it if I want to get anything done. If I have kept your interest this far, thank you, and please leave a comment if you feel so inclined.

One thought on “About”