Once upon a time – – and not in a galaxy far far away – – carpets were named after the people in the area they came from: Persian rugs came from Persia; Chinese rugs came from China; Caucasian rugs came from the Caucasus. That is apparently no longer true. In today’s world rug makers have suffered much the same fate as the Cherokee nation mourned by Paul Revere and the Raiders in their 1971 Platinum single, Indian Reservation: 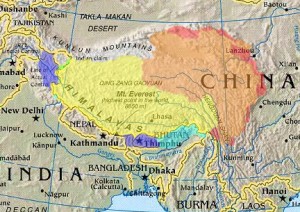 In the Roof of World much the same fate was thrust upon the Tibetans by the Chinese Communists. In the lines above substitute Chinese for English. Change “beads” to “carpets,” change the country “Japan” to “Nepal” and you have the lament of the Tibetan carpet weavers forced out of their native land. 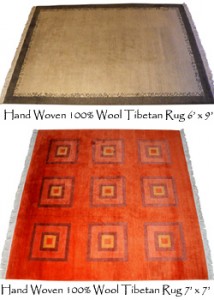 What did they lose? I think this paper I found on the Internet by Swetha Ramaswamy for an international studies course at George Washington University gives us more than a clue:Tibetan Carpets…Or Are They? An analysis of the carpet industry in Kathmandu Nepal

For centuries, Tibetan custom dictated that a mother weave a carpet upon the birth of a baby girl. This carpet, and the knowledge of its weaving was a birthright; the girls first possession and skill developed at the tender age of 10. According to tradition, a girl’s marriage may signify the end of direct kinship ties to her own family, but the carpet woven at her birth, and the practice behind its creation, was and would be passed down to her and her future lineage. Even today in every Tibetan home, one would find a plethora of carpets adorning the beds and floors. Unlike many Tibetan goods, however, their value lies outside the realm of Buddhism; carpets seem to play the simple role of keeping the people of the “Roof of the World” warm, and connecting mother with daughter. As such carpet making would remain a household activity… until after the 1959 Diaspora.

At which time the XIV Dalai Lama and thousands of his followers fled Tibet to Nepal and what had been a household activity became a means of subsistence and is now one of the most important industries in Nepal.   According to Swetha Ramaswamy, “… with the inclusion of Nepali workers, several people now call them Tibeto-Nepali Carpets or Tibetan-style Carpets. For the purposes of this paper, a Tibetan carpet is not defined by who makes it, but rather one made in the traditional, hand-knotted, wool-woven style.”


A sad commentary perhaps, but that’s life in today’s global society.  Perhaps Native Americans can take some comfort from the fact that famous Japanese automobile brands like Toyota, Subaru and Nissan are now marked “Made In USA.”