I am always on the lookout for something I didn’t know about rugs–and that’s a lot of stuff! The other day while reading a biography of Sigmund Freud (Freud: A Life For Our Time by Peter Gay) I came across this: “The famous couch was a production in itself, piled high with pillows, supplied with a rug at its foot for patients to use if they were cold, and covered with a Persian rug, a ShIraz.” Well, what could I do? I had to find out what I could about this rug…

Gay describes the carpet as a Shiraz. Shiraz is a city in the Fars province of Iran. That is where the carpets were gathered for sale in the late 19th Century.  The Shiraz carpets are noted for their rhomboidal motifs… 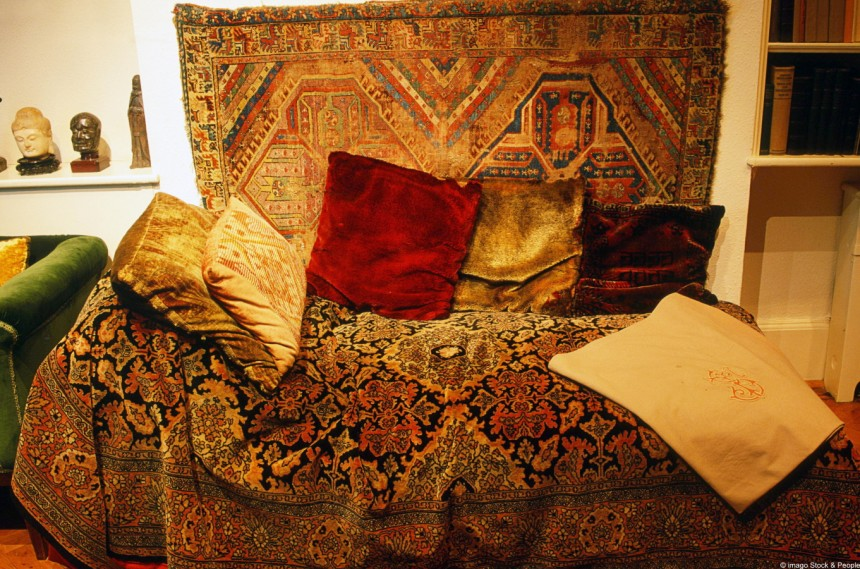 The carpet in question is the one spread across the entire couch.   According to MARINA WARNER in her wonderful article Freud’s Couch: A Case History, the rug was made in the latter half of the 19th Century and presented to Freud by his cousin, Moritz Freud in 1883.  At first called  a Smyrna Carpet, it is now believed to be a Ghashghai, made by the sheep and goat herding tribe of the same name in the Fars province further East.  She could be right, for according to Rosa Belle Holt in her 1901 edition of Oriental and Occidental Rugs, “it is a mistake to imagine that the so-called Smyrna rugs are made in that city. As a matter of fact, no rugs are manufactured there.  It is the export depot for goods made from the interior, and dealers have allowed the name to be used merely for convenience. 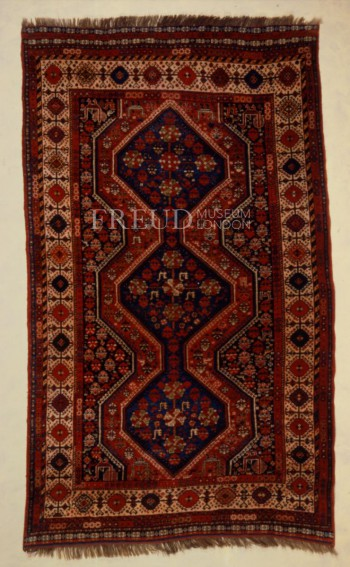 Carpet On Freud’s Couch
Thanks to London Freud Museum

“Quoting MARINA WARNER in her article Freud’s Couch: A Case History  in which she brilliantly used the design on the carpet on Freud’s couch as a metaphor for his analytical process:  “The three central diamond medallions of the rug on Freud’s couch are framed inside several borders of different width and elaboration, one set inside the other. I counted ten, but others may distinguish them differently. This structure echoes the unfolding of significance in psychoanalysis, as one circle of meaning encloses another, moving in toward the core. It is as if Freud chose to give his patients a place to lie and dream and speak, which itself reproduces the modes of patterning, knotting, repeating, interlacing, and combining that he was there to decrypt as he listened in.”

The image below is a composite formed by patternpeople.com which gives us a great shot of the rug on the couch when the genius himself was still around (black and white 1938) and now enshrined in the London Freud Museum in all its bright colors. 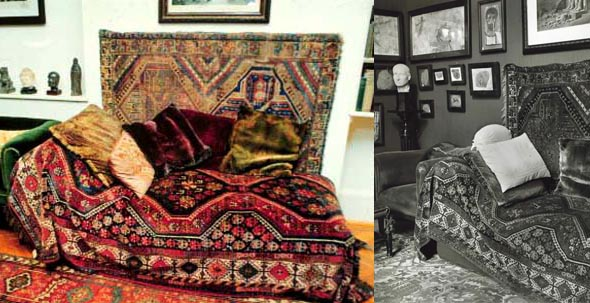 One thought on “The Carpet On Freud’s Couch”