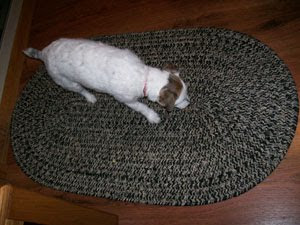 A few months ago I decided to learn something about a subject that had always interested me but remained unexplored.  I say unexplored because in some ways this can be compared, I think, with traveling to a part of the world you’ve always wanted to see but couldn’t afford.  Believe it or not, there is an advantage to be found studying the near-at-hand that isn’t just pecuniary, there is the thrill experienced from seeing something for the first time, something that’s always been there, underfoot, but unrecognized and unappreciated.  Such is the pleasure I took from realizing that the inexpensive rug next to my dinning room chair had a name and a history as old as this country.
I intend to provide this blog with a picture of this rug so I won’t try to describe it beyond saying that it’s oval shaped and anybody who’s ever frequented a Target or Kmart store has seen hundreds of them piled up on the shelves.  I for one have never given them a second look.  We bought this one to lie next to our dogie-door to soak up the wet and mud when our Jack Russell terriers returned from the outdoors.
Its fabric might have come swimming out of a bubbling vat of anonymous chemicals, and it might have been woven on a conveyor belt in a nameless mechanical loom, but this rug, like you and me and the terriers, has a history and a pedigree.
This rug’s most distant ancestor in this country was the colonial rag rug.  Colonial rug makers, mostly poor housewives, had to make do with what they had.  And what they had was rags from worn-out clothing.  Working all day without any of the laborsaving appliances we take for granted, short of both time and money, they sewed the rags together almost haphazardly, threw them on the coldNew England floors, covered their drafty windows and used them as bed coverings.
The American Braided Rug’s historical significance is tied to the colonies’ gradual change from primitive farmstead to a culture that allowed craftsmanship to flourish for art’s sake.
Braided rugs—and our rug is a braided rug—represent the next level of rug making both technologically and artistically.  Life must have improved somewhat, because instead of just throwing the rags together, the colonial housewives laboriously cut them into strips, plaited them into flat braids, and starting from the center, sewed the braids along their edges forming an oval—the very shape of my modern braided rug. They even took the time and effort to try to make them aesthetically appealing by plaiting the rags in repeating color schemes.  Heavier and warmer than the earlier rag rugs, the oval shape made it more difficult for the housewives’ husbands’ muddy boots to kick them aside; a virtue we count upon today to save our wooden floors from our terriers’ wet feet.