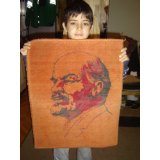 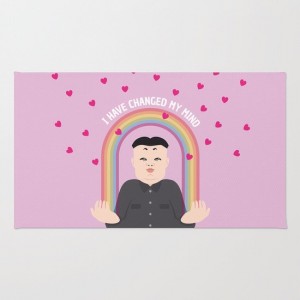 The original domain name for this blog was www.rugs.su. Su was the domain extension for the now long-departed Soviet Union, but I was so pleased to have a four-letter domain extension I decided to overlook that; besides, as a history buff I think it’s cool!  Since the Soviet Union started with Lenin I thought it was a good idea to have a picture of him on a carpet at some point near the beginning of this blog. I found this picture on a wonderful site called EnglishRussia.Com As you can see from the picture, art was less important than politics at that time. Does that run true through the entire Soviet period of carpets and wall hangings etc? Didn’t beauty still count for something even during the darkest years? I wonder if this was actually a rug. I would guess it to be a wall hanging. Can you imagine a Communist of this early period throwing this thing on the floor and walking all over it. I’ll be they wouldn’t do that with Stalin’s image on a carpet or anything else! There are stories, in fact, of people being dragged off to the gulag or worse for putting a cup of coffee on a picture of Stalin. One poor soul was shot for accidentally dropping a pictureof Stalin and stepping on his face. 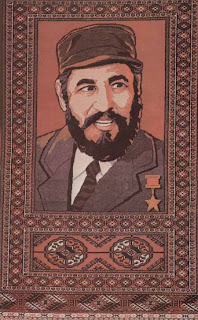 Here is another familiar face.  This guy is still alive–so far as we know.  Is that a Hero Of The Soviet Union medal on his chest?  I wish there was some way of telling if these rugs were machine made or if some poor apparatchik spent several years of his/her life trying to make the thing. Actually a rather attractive carpet.  These carpets now hang in the Soviet Museum in Moscow. I wonder where they hung before the fall of the Soviet Union.  Did people actually have them at home or were they for state occasions only in the halls of the Kremlin?