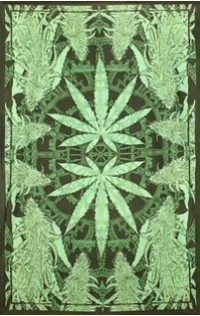 Thanks to the Tippy Store
at tippystore.com

A Weed is defined as either…..1.“a wild plant growing where it is not wanted and in competition with cultivated plants,” or according to the Urban Dictionary, 2. “God’s gift to the world. Brings peace when used wisely.” The second option, of course, describes what many of its users say about marijuana.

Marijuana rugs found for sale and display on the internet are rugs with marijuana designs rather than rugs woven from marijuana. In fact, I couldn’t find any that claimed to be  made from the stems of the marijuana plant. According to the Stonerscookbook dot Com, there is enough THC in the stems to make smoking it more fun than weaving with it. Most of the marijuana rugs I found were actually of man-made-fibers like polyethylene. Some of them are quite beautiful! 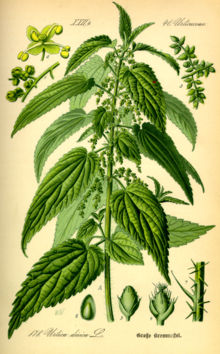 This hurts but makes wonderfully eco friendly and beautiful rugs 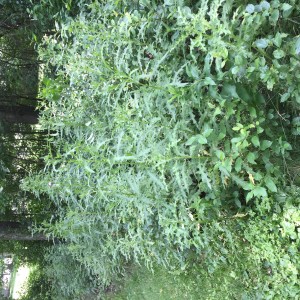 On the other hand, definition number one, “a wild plant growing where it is not wanted and in competition with cultivated plants,” describes perfectly the “stinging nettle,” a plant considered a weed in most locales, and for long ages harvested for fabric in clothing and rugs, carpets and tapestries. A courser fabric than cotton, it grows well without pesticides and needs far less care and water to grow–it grows wild in every state except Hawaii.

Wiki entry…………Urtica dioica, often called common nettle or stinging nettle (although not all plants of this species sting), is a herbaceous perennial flowering plant, native to Europe, Asia, northern Africa, and western North America,[1] and is the best-known member of the nettle genus Urtica. The species is divided into six subspecies, five of which have many hollow stinging hairs called trichomes on the leaves and stems, which act like hypodermic needles, injecting histamine and other chemicals that produce a stinging sensation when contacted by humans and other animals.[2] The plant has a long history of use as a medicine, as a food source and as a source of fiber. 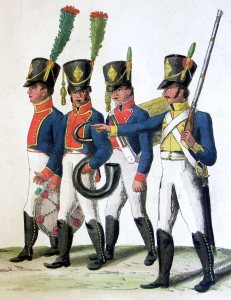 Uniforms of stinging nettle? No wonder they were so tough to beat!

Stinging nettle’s medicinal uses includes a treatment for prostate problems (this is one old guy that doesn’t intend to try it!). It was harvested for uniforms by both the Germans in the First World War and Napoleonic infantry a century earlier when the British navy cut off the supply of cotton from the United States. Interestingly enough both armies lost their respective wars.

No doubt the stinging nettle was used for medicine and fabric untold millennia before the Kaiser and Napoleon ran out of cotton. Today it is viewed by many as the “next big thing” in fabric because of its eco friendly aspects: A courser fabric than cotton it grows well without pesticides and needs far less care and water to grow–it grows wild in every state except Hawaii.   But of course it is our interest in stinging nettle’s use as a fabric in rugs, carpets and tapestries that sturrs us here…so let’s see what we can find: 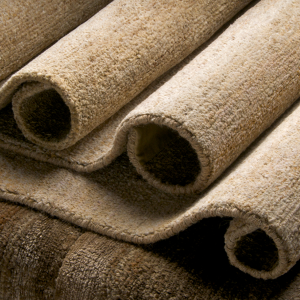 ecoFiber CustomRugs describes the nettle fiber as displaying “a rich sheen with a subtle reflective quality similar to silk.”

subtle reflective quality similar to silk.” They harvest the nettle in Nepal. Would American nettle serve as well? Possibly, but where would the company find the artisans in this country capable of producing in volume at a price we could afford?

One Western artisan that does apparently hand weave tapestry with nettle fabric imported from Nepal (so maybe there is more to Nepalese nettle than simply cache) is Jane Brunning; she is also willing to sell the fabric to interested weavers…

Nettle Tapestry thanks to Jane Brunning of janebrunningtapestry.co.uk

Of a number of other rug designers on the Internet that specialize in eco-friendly rugs and fabrics, one of the most interesting sites with its beautiful images, videos and philosophical musings is certainly Nanimarquina at Nanimarquina.com where I found this lovely tribute to the nettle plant… Nature reveals her beauty in unexpected ways, as is the case of the nettle plant. Harsh and prickly, usually avoided at all costs, the hand-spun nettle fibre is extremely resistant and soft, perfect to create rugs. The hand-knotted Nettle rug presents a unique surface, comfortable and inviting… 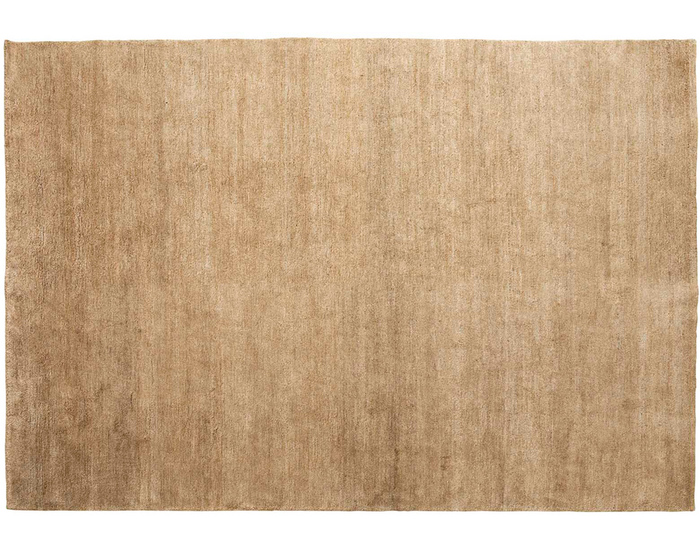