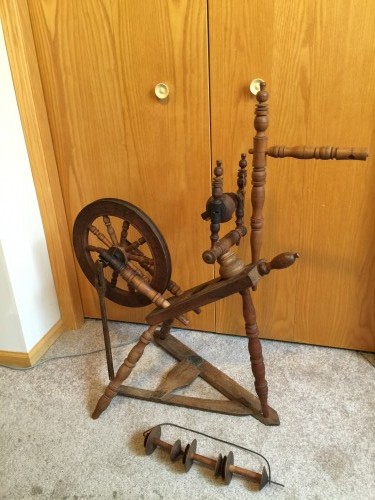 Side View of My Spinning Wheel

I didn’t go looking for antiques but I soon discovered that the new machines made for craft use were darn pricey. For that matter, the antiques aren’t going for free either.

But I found this little beauty for $75 right down the street. It looks ancient. I found several that looked like it on the web; all from the 19th Century. Couldn’t find mention of its origin anywhere…I’m certain it wasn’t made in China!

Check out the Cool Spinning Wheels on Amazon–a bit more up-to-date than the above!

Unfortunately the gentleman I purchased it from wasn’t sure when or where he had come by it so I don’t know anything about it’s history. Maybe I’ll make up a story myself. Maybe something like it was originally owned by the first Dr. Mayo’s wife and she spun the yarn for his socks–boring! How about Mrs Mayo loaned it to Lizzie Borden so she could spin out her parents funeral shroud–bet that would boost the resale value!

I wanted to tear it down and clean it as it has a bit of an oil smell. I’ve never worked with wood–much less wood that was more than a century old.  I’ve worked with computers, VCR’s, televisions and monitors but my experience wasn’t much help.  Breaking down the flyer was the most difficult part. It took me several hours of twisting and turning until I found the little sliver of wood that was holding it between the maidens. Then I wrestled with the little drive wheel until I discovered it needed a more modern approach–unscrewing. Who knew?

Of course when I first saw it I imagined racing home and learning how to spin on it–I bought some fleece at Hobby Lobby yesterday–but as I said earlier, I had no idea what I was doing. For a while cleaning it up and studying it is all I am going to do…

I broke it down and cleaned as much of the oil off as I could; this is what it looks like now. 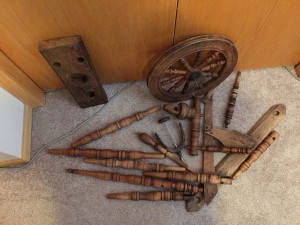