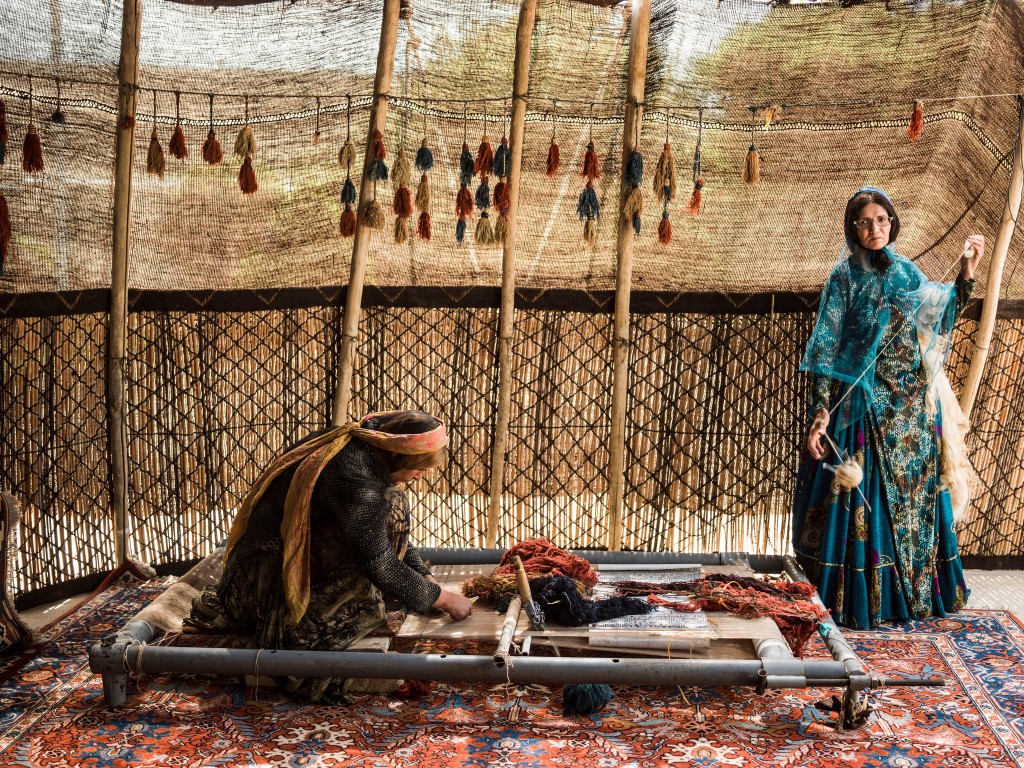 Nomads and others at a carpet production center owned by a family of carpet traders outside Shiraz. Credit Newsha Tavakolian for The New York Times

No more Persian Rugs? Oh, no!!

I usually like to write my own posts but this one, heralding no more Persian Rugs, was too important to paraphrase so I decided to up load it directly to my blog. It originally ran in The New York Times on Friday, May 27 2016 entitled The Persian Rug May Not Be Long for This World   Please note that to alleviate my guilt I have linked the New York Times article to the original article in the Times.

SHIRAZ, Iran — For centuries, Iran’s famed carpets have been produced by hand along the nomad trail in this region of high plains around the ancient city of Shiraz.Sheep grazed in high mountain pastures and shorn only once a year produce a thick, long wool ideal for the tough thread used in carpet making.But high-quality production of hand-woven carpets is no longer sustainable on the migration route of the nomads, said Hamid Zollanvari, one of Iran’s biggest carpet makers and dealers.Instead, he had built a factory with 16 huge cooking pots, where on a recent cool, sunny spring day men in blue overalls stirred the pots with long wooden sticks, boiling and coloring the thread. As the colored waters bubbled, they looked like live volcanos. The air smelled of sheep.

It is a scene that seems as ageless as the women who sit before the looms and weave the rugs, a process that can take as long as a year. And now even the factory is threatened. With six years of Western sanctions on the carpet business and punishing competition from rugs machine-made in China and India, these are hard times for the craft of Persian rug making. Many veterans wonder whether it can survive.

Over the centuries invaders, politicians and Iran’s enemies have left their mark on Iran’s carpets, said Prof. Hashem Sedghamiz, a local authority on carpets, sitting in the green courtyard of his restored Qajar-dynasty house in Shiraz. The outsiders demanded changes, started using chemicals for coloring and, most recently, imposed sanctions on the rugs. Those were blows, he said, damaging but not destructive.

But now, Mr. Sedghamiz said, the end is near. Ultimately he said, it is modernity — that all-devouring force that is changing societies at breakneck speed — that is killing the Persian carpet, Iran’s pride and joy. “People simply are no longer interested in quality.”

Or in paying for it, he might have added.

This year, after the nuclear deal was completed, the United States lifted six years of sanctions on carpets. But even with that, the Persian carpet is in a critical state as fewer and fewer people buy them.

“These days, everyone is seeking quick satisfaction and simplicity, but our carpets are the complete opposite of that,” Mr. Sedghamiz said.

His message was not what officials of the Iran National Carpet Center had in mind when they organized a tour for a group of foreign journalists last weekend. Still, none of them could really argue with Mr. Sedghamiz’s conclusion.

One thing is for sure: Iran’s carpets are among the most complex and labor-intensive handicrafts in the world.

It is on the endless green slopes of Fars Province, in Iran’s heartland, that the “mother of all carpets,” among the first in the world, is produced: the hand-woven nomadic Persian rug.

The process starts with around 1.6 million sheep grazed by shepherds from the nomadic Qashqai and Bakhtiari tribes, who produce that tough, long-fibered wool so perfect for carpets.

Only then does the weaving start. Weavers, almost all of them women, spend several months to a year bent over a horizontally placed loom, stringing and knotting thousands of threads. Some follow established patterns, some create their own. When the carpet is finally done, it is cut, washed and put out in the sun to dry.

“It’s so time consuming, real hand work,” said Mr. Zollanvari, the carpet dealer. “A labor of love. And what does it cost?” he asked, before answering the question himself: “Almost nothing.” A 6-by-9-foot handwoven carpet costs around $400 in Shiraz, depending on the pattern and quality.

The sanctions were really painful, Mr. Dideroushan said, and to him, at least, inexplicable. “Let’s face it, what do carpets have to do with our nuclear program?”

Not only that, but Persian carpets have fallen out of favor even in Iran, with many middle-class Iranians preferring cheap plastic laminate floor covers. Those who still like carpets often go for cheaper Chinese and Indian knockoffs.

“We are selling around 10 percent of what we used to sell over a decade ago,” said Morteza Talebi, the head of the council of the Shiraz bazaar. The century-old bazaar was filled with carpet shops, but there were no buyers.

Even the original producers of carpets, the nomads, are becoming harder to find. Mr. Zollanvari took the reporters to a nomadic camp outside Shiraz. There, men cheerfully blew trumpets and shot rifles into the air to celebrate the visitors. Women in colorful traditional clothes were spinning wool, others weaving a carpet.

But it turned out that several of the “nomads” were recovering drug addicts from other parts of the country who were entertaining tourists as part of an attempt to stay clean.

“Many nomads are in search of jobs and better salaries,” said Mina Bahram Abadian, a member of an Iranian group that helps nomads and drug addicts. Their situation is not that different from the problems many indigenous people have worldwide, she said.

“Divorce rates are up, as is drug use,” she said. “They cannot cope with all the changes. They get depressed and stop making carpets.”