No, no! Not BATT-OUT-OF-HELL!  I doubt that Prince Harry does much in the way of knitting. Nor, I imagine does the Duchess of Sussex. They do appreciate Meat Loaf, however.    The phrase is B-A-T OUT OF HELL!  That is Bat with only one t!; it’s a Georgian phrase meaning something like Faster than a speeding bullet. “Batt” and “Bat” are homophones(literally “same sound”), but while they sound the same, they are different things. Here on the left is a bat with one “t”:

Below is the image of a batt. After all, this Blog is about Rugs, Carpets and Tapestry, not small mammals, cute and cuddly as they may be!

Why  am I blathering? Well, I was online looking up information on my favorite subjects, Rugs, Carpets and Tapestry when I came upon a bit of news from the other side of the Pond. Apparently Prince Harry was going to attend a Bat Out Of Hell concert without his consort, Meghan Markle.  I guess a rock concert was too vigorous a venue for the duchess in her delicate condition (but Meat Loaf?). Anyway, I’m desperate to make this post interesting and I saw a connection between the phrase BAT OUT OF HELL and Rugs, Carpets and Tapestries.

OK, what is a Batt? I guess it depends on who you ask. If you Google the word “BATT” the first thing you see is this:

The  wool batting above was only recently carded, meaning that the individual fibres have been tangled together in a carding device.  And, since this is a blog about Rugs, Carpets and Tapestry, that should be the only definition that interests us in this blog post. Should…but then if you go to the next entry you discover the following:

Urban Dictionary: Batts: A Batt is a Welsh person, Batt is the way it is pronounced, but the word is supposed to be ‘bud’. Alright bud, in a welsh accent is ‘Aight Batt’.

I mean, who knew?

I’ve never met anyone with the surname Batt, but there is an obituary listed in the search entries. The first name, Bat, brought back a memory from my distant past. I doubt any of you reading this ever saw the TV Bat Masterson starring Gene Barry way back in 1958. This was the theme song.
They called him Bat, Bat Masterson

Back when the West was very young 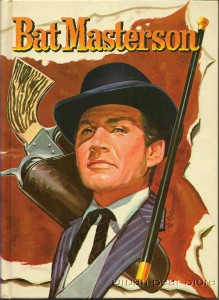 There lived a man named Masterson
He wore a cane and derby hat
They called him Bat, Bat Masterson.

A man of steel the stories say
But women’s eyes all glanced his way
A gambler’s game he always won
They called him Bat, Bat Masterson.

The trail that he blazed is still there
No one has come since to replace his name
And those with too ready a trigger forgot to figger
On his fighting cane.